Austin Ryan: A Name to Watch in Ontario Golf

We want to give a big congrats to Austin Ryan for winning the Great Lakes Tour Collingwood Classic, played at Batteaux Creek Golf Club this past week. Austin has had an impressive start to the season and this was a well-deserved win! We are excited to sponsor Austin for the golf season and will be providing updates throughout the season. 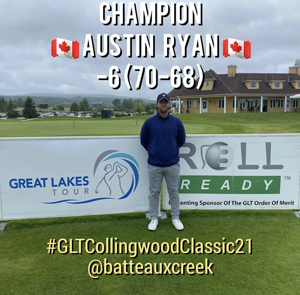 Austin started off the tournament Thursday with a Bogey but battled back to 1-under on the front nine. A first-round, 70, put him in a solid position to make a push for the lead in round two. Austin started Friday with another 1-under front nine and knew he needed a strong finish to jump into first place. Austin got on a roll birdieing the 10th and 12th and took this confidence into the final holes of the tournament. More birdies came on the 15th and 16th holes for Austin and even with a bogie on the 17th, a back nine 33 was enough to hold off Brendan Leonard and Cam Kellet and secure the win. We are very excited to see Austin top the leaderboard!

Austin has had a phenomenal start to the 2021 golf season, being a contender in almost every tournament thus far. The chart below outlines Austin’s tournaments, showing an impressive performance across the board. 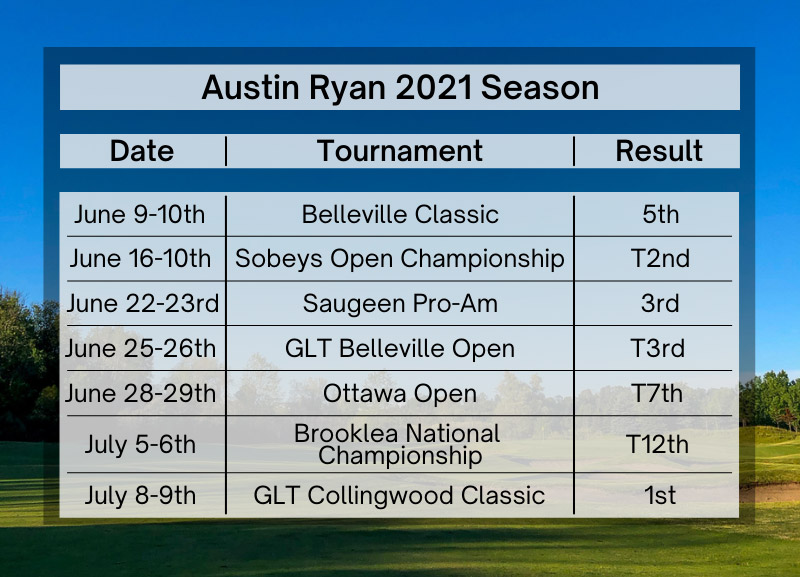 The first major of the year was the Sobeys Open Championship, played at Quarry GC in Ennismore, Ontario. Austin didn’t get the start he wanted after shooting a 73 the first day but bounced back in a big way, showing why he is such a great golfer. After a 3-under front nine, Austin was dialed in and posted a 5-under, 31 on the back nine. A final round of 64 was a tournament-low and gave Austin a second-place finish. A great performance for the first major of the year, giving Austin a good start in the Golf Town Points Standings.

Austin followed the Sobeys Open with another impressive performance, earning a 3rd place finish at the Saugeen Pro-Am. Conditions on the course proved to be difficult, with only 9 players achieving a sub-par score for the tournament. Austin was able to play solid golf and put up a 3-under total. This gave Austin another 360 points towards the Golf Town Points Standings.

Austin’s performance in both the Great Lakes Tour and the Toronto Players Tour have positioned him well in the points standings. In the Golf Town Official Order of Merit, the Toronto Players Tour Standings, Austin is in second place after five solid performances. In the Great Lakes Tour Order of Merit, he is in fourth place after two tournaments, less than 100 points from the top of the leaderboard. He has performed well and showed he can be near the top of the leaderboard in any tournament he enters.

Keep an eye out for more updates on Austin on our website and social media. We are proud to sponsor Austin this year and will be following him as he competes in tournaments around Ontario. Austin is an alumni of the Wilfrid Laurier Golden Hawks men’s golf team where he won MVP three times and the 2016 OUA individual Gold medal. Along with this, Austin represented Canada in Taiwan at the 2017 Summer Universiade.

-The Team at Wood-Hall Logistics